Gallery 7: I’m Ready for My Close-Up Mr. Casteel: The Making of Underwater Dogs 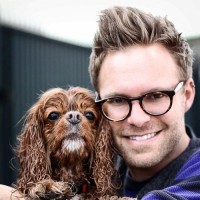 Take a picture of a dog?  Been there.  Take a photo underwater?  Done that.  But take a photograph of a dog underwater? Well, that was something new.

By the time Underwater Dogs hit bookstore shelves in Fall 2012, viewers were already hooked on the stunning photography of Seth Casteel.  Whether it was the never-before-memorialized moments that the photos captured – the surprise, the concentration, the sheer joy of play and total engagement in a watery environment – or the remarkable mastery of technique needed to create such evocative and vibrant scenes, it seemed audiences couldn’t get enough of these images.

Casteel, who was based in both Los Angeles and Chicago, and since winter 2013 is now based in Manhattan, is an award-winning photographer and New York Times bestselling author.  As one of the most interviewed and published pet photographers in the world, Seth has appeared on countless television and radio interviews.  His work can be seen in hundreds of magazines, calendars, posters and books as well.

But there’s more to Seth than just being the “underwater dog guy.”  A longtime animal shelter volunteer, he not only takes pictures of shelter pets in an effort to find them forever homes… he founded one nonprofit – and then co-founded a second – in order to teach others across the U.S. to do the same.

The conversation that follows is based upon our video chat interview with Seth, unless otherwise noted. Come with us as Seth recounts his journey from a random decision to let a canine run his photo shoot to being one of the most celebrated names in modern photography.