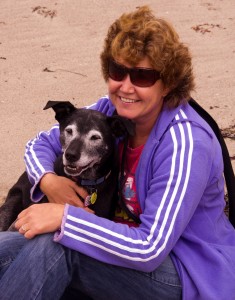 Originally from Australia, Kim moved to the Santa Cruz Mountains in California in 2011 to be with her partner, now husband, John.┬Ā Kim is a passionate dog lover and animal rescue advocate. KimŌĆÖs other passion is dog photography. Kim spends the majority of her time volunteering with Peace of Mind Dog Rescue; fostering dogs, facilitating adoptions, coordinating adoption events and photographing dogs at every opportunity.

KimŌĆÖs volunteer work also┬Āinvolves photographing adoptable dogs, adoption and other special events for Peace of Mind Dog RescueŌĆÖs website and social media forums. Kim is currently working on setting up her ŌĆ£Dogz On LocationŌĆØ photography business which will enable her to combine her passions. 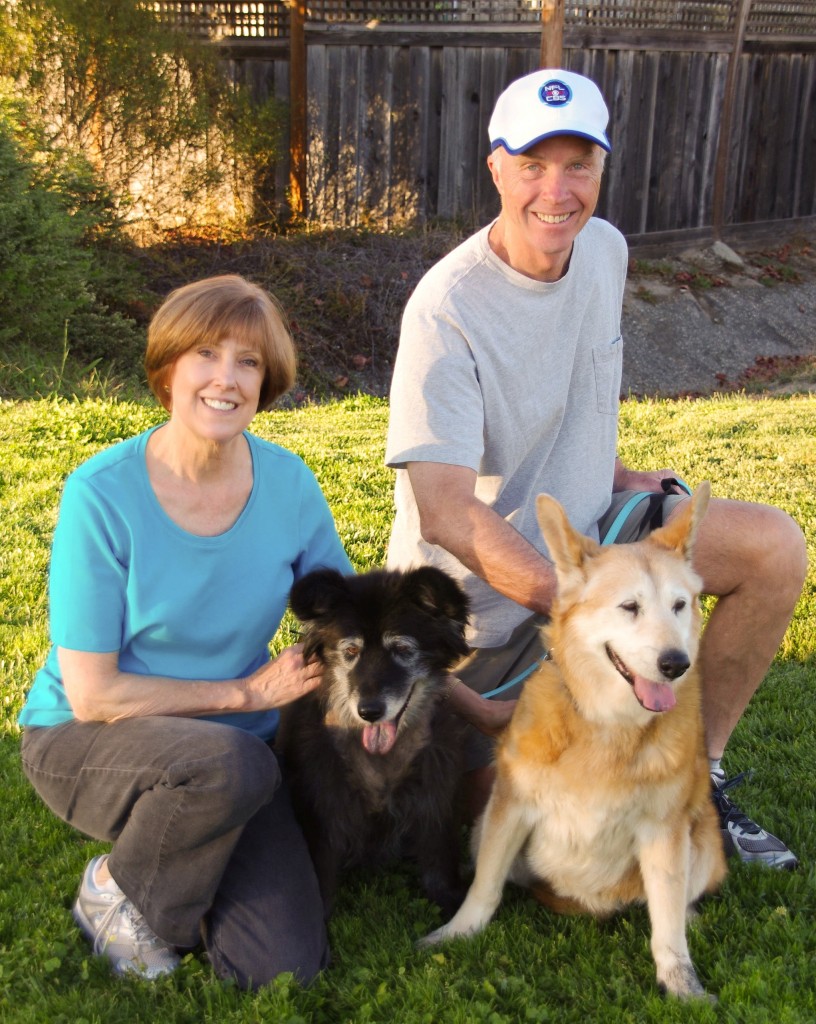 Fox and Bear were 13 years old when they were rescued by Peace of Mind Dog Rescue from a dilapidated shed where they had been living for 6 years.

How did they end up in a shed you may well ask? Well, thatŌĆÖs a situation we still struggle to comprehend. After their guardian died, they were relegated to the shed by the guardianŌĆÖs wife.┬Ā When she died, a Realtor was asked to ŌĆśdeal with themŌĆÖ. Thankfully the Realtor called us.

They needed extensive veterinary care and spent 6 months in foster care. Then one day Kathryn and Bruce saw their photos on our website and were able to provide the happy ending we had been hoping for.

We thank Kathryn and Bruce from the bottom of our hearts for opening up their hearts to Fox and Bear.┬Ā Their new home has an ŌĆśopen door dog policyŌĆÖ. They can choose to be inside, or outside in their beautiful garden, any time they like. They start off their mornings with a leisurely walk in the surrounding trails and end their days the same way. In between, they are free to snooze away the day, and to quote Kathryn, ŌĆ£just be themselvesŌĆØ!

ADDITIONAL INFORMATION AND UPDATE ABOUT FOX

Since submitting┬ĀFox and Bear’s story, sadly Fox passed away on 6/19/2013. She spent the last 10 months of her life┬Āin the most wonderful┬Āloving home. It was very sad as in the last week of her life she became very unwell very quickly┬Ābut at least she had an amazing loving home and didn’t die in that horrible shed where we rescued her from.┬Ā Kathryn and Bruce had the following to say about Fox when we recently added Fox to our ‘In Memory’ page on our website:

“When our elderly dog, Lucy, was nearing the end, we came across the story of Fox and Bear, a pair of 13 year-old Chow-mix sisters, litter-mates who had been rescued from a situation of severe neglect. On a Monday, POMDR volunteers brought Fox and Bear to our home to meet our pack, and see if we might be a good match for each other. We said yes right away! Arrangements were made to bring the girls back for good two days later. The next day, Tuesday, our beloved Lucy died. It seems she was waiting for us to find the right dog(s) to fill her spot in our hearts — a nearly impossible task, we thought. But Foxie and Bear arrived the next day, and from the first moment they were here, it seemed like they had always been part of our family. With their background, we knew there might be serious health and/or behavioral challenges ahead. POMDR, however, had already taken care of their physical problems: they both had gained weight, Foxie’s dental problems had been addressed, and they were well on the road to recovery. The months Foxie was with us have been pure joy. That she could have been such a calm, mellow, wonderful dog after all she had been through is a miracle. She stood out from our many canine family members because of her sweetness and easy-going temperament, in spite of years of living in the worst imaginable conditions without, it seems, much human interaction. She and her sister loved going for walks, being brushed, and just hanging out. But the best thing of all for Foxie was getting her big, soft, furry ears rubbed! She could sit quietly forever if her ears were rubbed! And she was in Heaven just to be able to stand close by. She never begged, nor barked, nor bit, nor misbehaved in any way. “

“It was just pure joy to be with her! Her eyes were bright and her spirit loving until the very end, when she was diagnosed with a very aggressive cancer, and there were no viable options for relieving her pain. We deeply miss our “velcro” dog, who asked for nothing more from us than companionship, sustenance, and a soft bed. We are so grateful to POMDR for allowing us to love her and feel her love in return.” 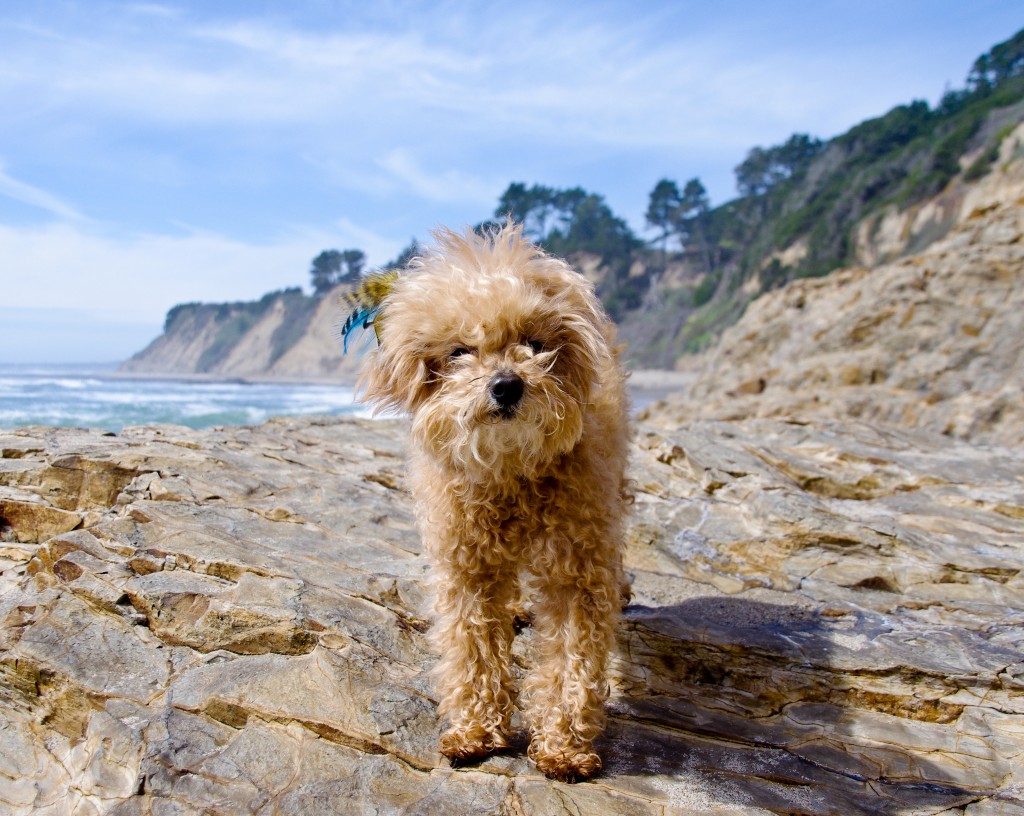 Loki was surrendered to Peace of Mind Dog Rescue by the daughter of his guardian when he was 10 years old. Poor Loki had been neglected for quite some time as a result of his guardianŌĆÖs AlzheimerŌĆÖs.┬Ā In addition to a number of other health problems Loki was going blind when he was surrendered.┬Ā Peace of Mind Dog Rescue paid for Loki to have cataract surgery and placed him in foster care so that he could recover and get ready for adoption. Loki was in foster care for 4 months and then adopted by a wonderful couple that live in Santa Barbara. Loki now lives the good life in Santa Barbara and is enjoying seeing the world through his new ŌĆślensesŌĆÖ and loving new home. According to his adoptive mom, ŌĆ£Loki is the love of my life, spoiled rotten, eats like a king and is a total grit hound. He walks with his two sisters every day, rides in the car, and amuses us endlessly with his commentary and chatter.ŌĆØ

Zippy was 10 years old when he was rescued by Peace of Mind Dog Rescue as an emaciated stray from the Santa Clara area. Zippy was well socialized and loved everyone he met, dogs and people alike, Zippy never met a stranger.┬Ā Like many rescued seniors Zippy had his share of health problems and received medical treatment whilst in the care of Peace of Mind. Part of his health problems stemmed from the fact that he had no doubt been eating rotten food, on the streets for quite some time, prior to his rescue.

Zippy has a beautiful energy and is a gorgeous old sole but because he had been fending for himself for quite some time he tended to wear his welcome out and went through several placements before he found his forever home. One of his guilty pleasures was chasing cats, the other, jumping 6 foot high fences because he suffered separation anxiety. Kathryn, who had previously adopted a senior dog, Gavin, became involved in helping foster Zippy and completely fell in love with him. Kathryn recently adopted Zippy and is convinced that Gavin provides a calming influence over Zippy. Zippy now lives the good life in Santa Cruz with his new mom, Kathryn, and dotting brother Gavin. 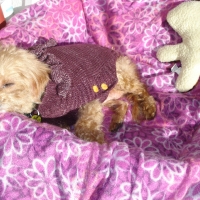 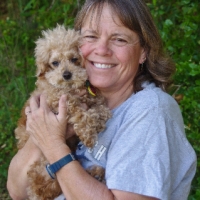 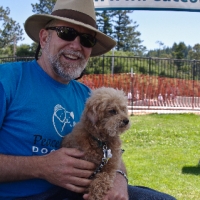 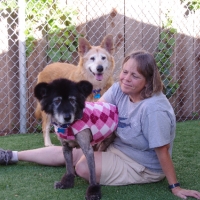 Fox and Bear first day out of the shed 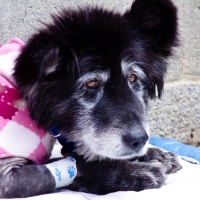 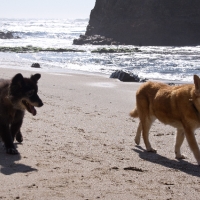 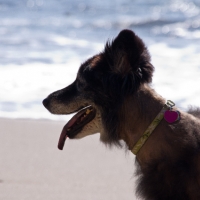 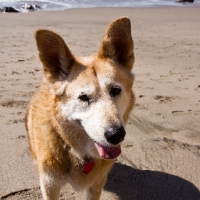 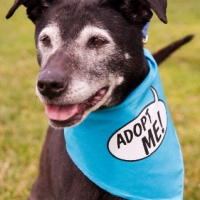 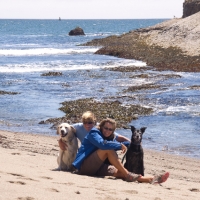 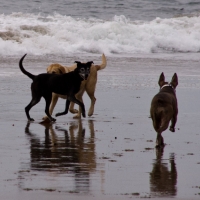 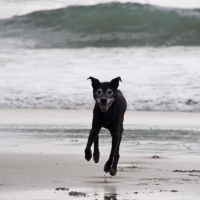