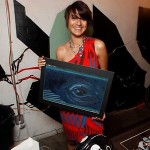 s an art activist, director, designer, writer, and public speaker. She was educated at Parsons the New School of Design, in New York. Shortly after graduating, she pursued a career working for various fashion houses in New York, which furnished her with the necessary experience to create her eponymous, exclusive, Prêt-a-Porter label. During her career she became passionate about textiles, printmaking and pattern design, fascinations that are frequently referenced in her fashion line and artworks.

She’s a staunch supporter of wildlife preservation, animal rights, sustainable development and marine conservation. She uses her fashion, art and writing to raise awareness about various ecological and humanitarian initiatives. Through her extensive travels across the globe, a background in environmental science and her studies in art history, she has developed an aesthetic sensibility that is an amalgam of contrasting cultural influences. All her work is anchored by the deep commitment she harbors toward the realization of a collective future.

Her most recent campaigns include the launch of her own country, The United Flotsam of Garbagea, (garbagea.com) and the works she produced for the Academy Award winning documentary, The Cove, which were auctioned at Ric O Barry’s “Night for the Dolphins” benefit in LA on March 3rd 2012. Asher Jay was awarded the USNC UN Women Design Star for her graphic artwork, which will be used on the official 2012 ‘Walk To Stop Violence against Women & girls’ tee-shirts by all the UN Women chapters across America. She is being published in Elizabeth Reznick’s upcoming book “Posters For the Digital Age” and the chosen work is also being showcased at Reznick’s MassArt exhibition. She was hand selected by RAW Artists to exhibit in Activate, an art collective, that took place on Feb 23rd 2012. Jay was commissioned to create a custom design for Blue Planet Society, an NPO situated in the British Isles, for the organization’s official 2012 Tee-shirts, and BlueMind picked up her “Blue on the Brain” graphic illustration for a promotional teaser for the June 4th- 5th 2012 MindandOcean.org Conference in Outer Banks North Carolina. Jay also contributed a 12” x 18” AP of her EnAct work “Within the Blue’s Eye” to the live auction hosted by Sea Shepherd Conservation Society at the event “Celebrating 35 years of Paul Watson” in New York on May 4th 2012.

Asher Jay’s work is currently carried and promoted by the Sea Shepherd Gallery, Indie Walls and Art For Conservation. If you would like to see more of, or purchase, Asher’s work, please visit: https://www.facebook.com/Asher.Jay.Art.Activism.