Part I: It was Buster’s idea

HomeExhibits & EventsOnline Art GalleryGallery 7: I’m Ready for My Close-Up Mr. Casteel: The Making of Underwater DogsEnter Gallery 7Part I: It was Buster’s idea 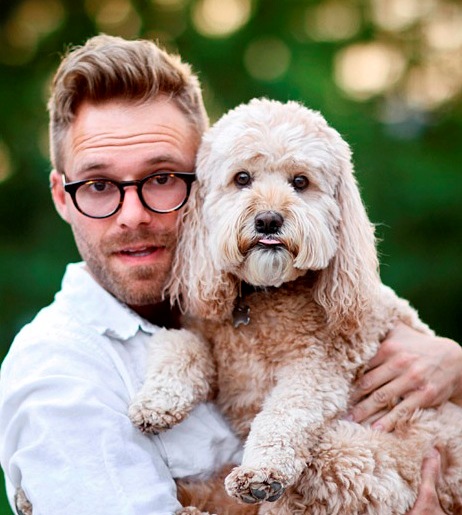 So when did you first become interested in photography?

I first became interested in photography in 2002 while living in Australia.

When did you decide to become a Lifestyle Pet Photographer?

I began volunteering to photograph homeless pets to help them get adopted, which eventually led to my gig as a Lifestyle Pet Photographer

How did you get the inspiration for Underwater Dogs? 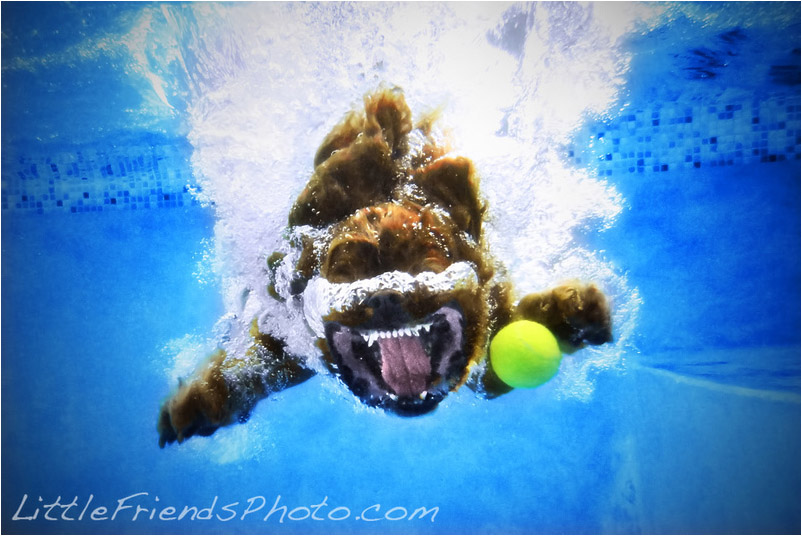 Buster.  He’s Cavalier King Charles Spaniel of a private client in Orange County (California).  This was a photo shoot for that client.  What I do, in order to make the animal comfortable and really bring out their personality, I like to do what the animal likes.  I didn’t even know there was a pool there.  I get to the client’s house and there’s a pool in the backyard.  We go out back and Buster was already jumping in the water.  The owner was upset because the shoot was supposed to be on land; she wanted dry shots.  But Buster was so excited about this game he was playing of jumping into the water and retrieving his ball that I thought I’ll try taking a few photos of that.

So I left, got a point & shoot underwater camera, came back and took some pictures of Buster using the point & shoot.  I didn’t know anything about underwater photography at all.  I went home and looked at the pictures and thought “wow”!  They weren’t great but I wanted to keep working on it.  Buster and I met a few more times and Buster taught me how to take these photos.  I tried putting a camera in a bag… rented some equipment… ruined a few cameras along the way.. and eventually bought the proper gear.

What’s one thing that Buster taught you for this book?

It (the whole book) was Buster’s idea.

Dogs have this incredible connection with water.  Not all dogs of course. Some really don’t like to swim.  But for many, it’s just that they never had the chance to try.  That’s something else I learned from Buster.

[Editor’s note: At this point in the interview, Seth pushes up his sleeve to reveal what can only be described as a ginormous tatoo of Buster on his left arm. ]

We’re going to need a picture of that.

[We attempt, unsuccessfully, to take a usable screenshot from our video chat.  Seth offers instead to email us some photos, seen below.] 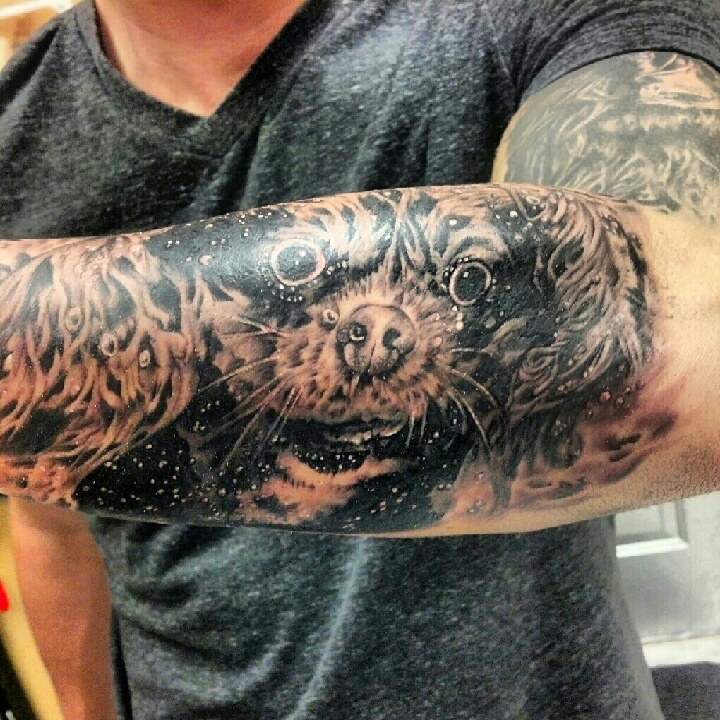 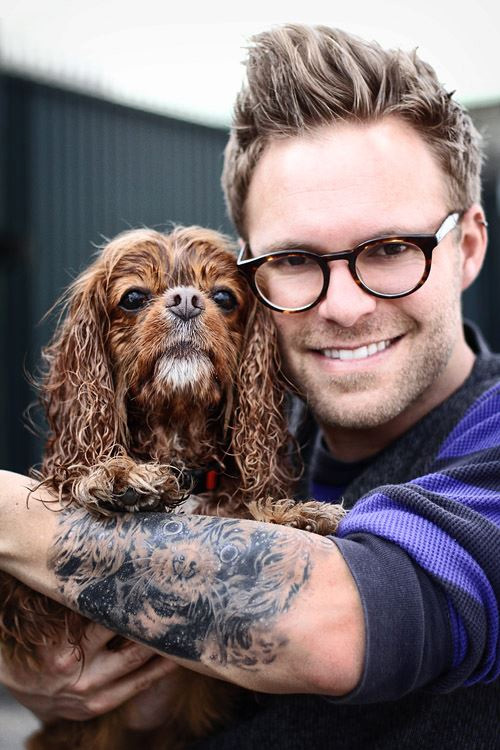 Did you learn anything else from working with Buster?

“If you just jump in, you might have fun along the way.”

So how did the book come about? 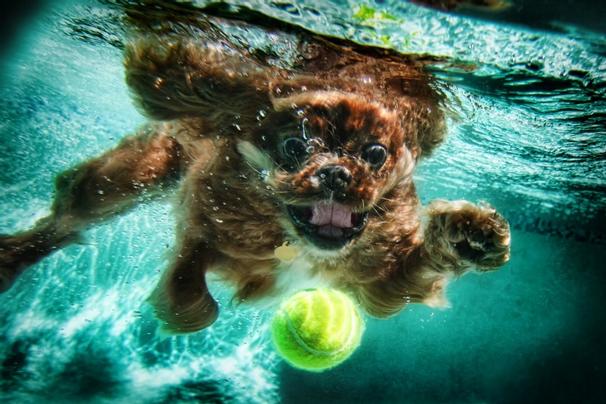 Well, I started with taking some photos of Buster… tried out a lot of different gear… and finally bought the right housing to really take the shots I wanted.  Then I started taking pictures of other dogs.  That initial series of photos – I posted those to my Facebook page and website.  It was those early photos that went viral and that’s how I got a book deal.

At that point, I had 60 days to shoot the rest of the book.  During those two months, I photographed about 300 dogs. I had casting calls; it was something to see.  I’d spend about 20 minutes with a dog.  Some really took to it, others no.  The book came out six months later in October 2012. 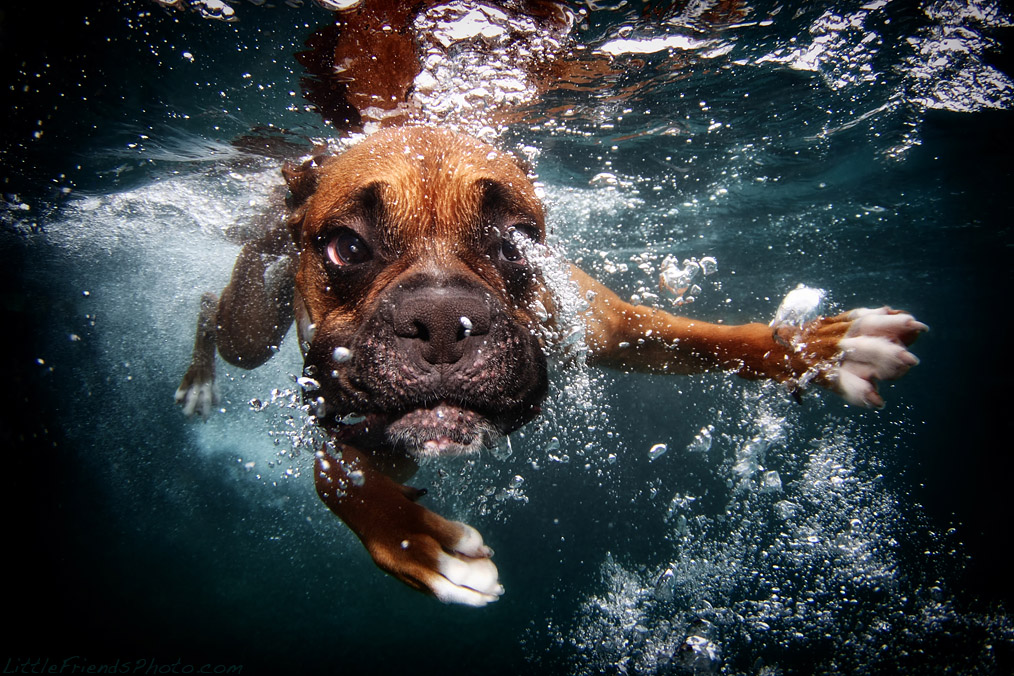 Was there any one dog that you photographed who stands out in your mind?

Rex.  He’s a boxer in Lake Havasu City, Arizona.  Probably the most talented swimming, diving dog I’ve ever seen.  He would swan dive from the edge of the pool, and dive down 9 ft to the bottom.  I was waiting for him down there so I saw this.  He’d go chasing after his toy, get it, turn to look at me, then push off with his hind feet from the bottom of the pool!  He had the mechanics of it all figured out.

Watch a video of Rex in the water:

More underwater books followed – tell us about them. 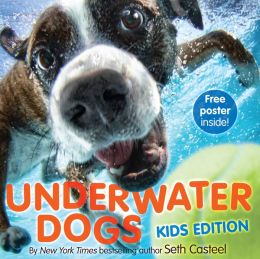 Underwater Kids just came out this past September.  We realized that while some of the photos in Underwater Dogs are fun, they also show the dogs baring their teeth or in similar poses that could be scary to children.  So the kids’ book has some of the original photos, but also a lot of new ones.  There are no “primal shots” and it has a rhyming verse.

We photographed over a thousand puppies for Underwater Puppies.  That’s scheduled to come out in 11 months, in October 2014.

So we take it there are no plans for Underwater Cats?

Well, if you look at the registration for underwatercats.com, I own it. (Smiling)  A book?  I don’t know. I’m not opposed to it.   Many cats don’t like the water.  But some cats do love the water, that’s for sure.

There are some critics who say it’s wrong to make a dog go underwater, and especially puppies who don’t know how to swim.  How do you respond to those criticisms?

If anyone is saying that, it’s not true.  All of the dogs in the book chose to participate.  The ones who didn’t, aren’t in the book.  I know some labs and retrievers who aren’t swimmers, although it was really more because they were so anxious.  On the other hand, I’ve heard some people say “Dachshunds? Impossible.”  It’s not. 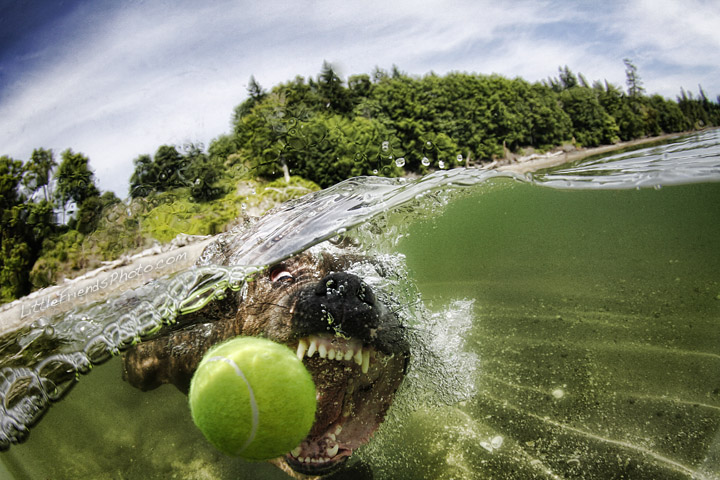 Underwater Dogs breaks stereotypes like that.   Some people believe that “certain types of dogs” just don’t swim.  That’s not true.  It’s important for people to let dogs enjoy the water and especially to teach them safety.  By denying dogs the chance to explore, you could actually be endangering them.  If they never learn water safety and accidentally fall into a pool, they could drown.  Being in a pool is different than swimming in a lake or the ocean where if you go the edge you can just walk out.   Some people say, for example, “bulldogs can’t swim.”  But for many, it’s just that they haven’t figured out their buoyancy yet.  I’m a huge fan of teaching dogs to swim.  It’s an important skill to have; so is knowing how to get out of a pool.  And it’s important to teach puppies to swim at a very early age. 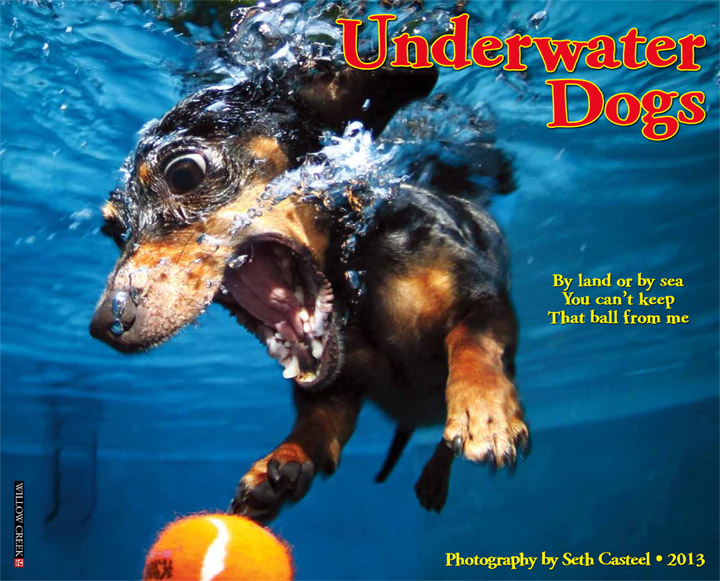 Here’s an example.  I had one client, Gary, with two dogs, Rhoda and Phyllis.  The dogs had never been swimming before even though Gary’s house has a pool.  Well, his neighbor also had a pool – and a dog that wasn’t allowed in that pool either.  One day, the dog fell in accidentally and drowned.  Gary didn’t want that for his dogs, so he taught them how to swim and especially how to get out of the pool.  The foundation is teaching confidence in the water and how to get out of a pool.  Every puppy should go to swimming lessons at an early age.