You just never know when something’s gonna go viral.  Seth first posted his photos of dogs underwater to his Little Friends website in February 2012… and the rest is, as they say, history. 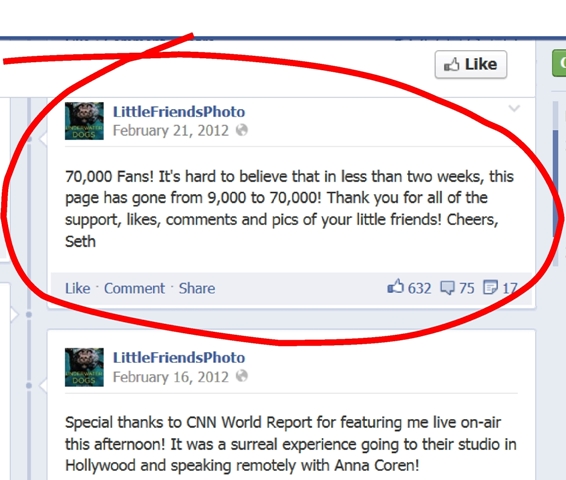 His site, which normally handled a couple hundred visitors per day was suddenly swamped with more than 100,000 a day  –  and was getting so many orders for prints that it was having stability issues![1]   Seth also received nearly a thousand requests from people around the world for private photo shoots with their companion animals.[2]  Other social media likewise exploded.  Little Friends’ Facebook page went from a 4-digit fan base to 5-digits in a matter of weeks (with 6-digits not long afterward).

That excitement turned into an unabashed frenzy with the publication of Underwater Dogs later that year.  The sometimes-hilarious, sometimes-surprising, always-unique moments that became the hallmark of Seth’s style had clearly struck a chord and captivated audiences worldwide.  To date, the photos have been seen by more than 150 million people around the world[3].

Seth and his work have been featured on numerous media outlets, including: Good Morning America, Extra, CNN World Report, The Today Show, Jeopardy!, The Insider, Inside Edition, and more.

Here are just some of the video clips:

Seth’s underwater photography has been featured in hundreds of magazines, calendars and other print and internet articles as well.

From outlets geared toward animal lovers and photographers…

“Casteel’s underwater photos reveal surprising emotions: a Labrador Retriever menacingly bares his teeth, a Bulldog looks wide-eyed in astonishment, and a Border Collie appears slightly goofy as she dives after a tennis ball. “I’m drawn to the emotions of dogs because they have a similar range of emotions as we do. It’s fun to see the exaggerated expressions from these dogs,” says Casteel, who splits his time between Chicago and Los Angeles.

‘My whole thing is that I do what the pets like to do. I don’t put them in the studio. I do it on their terms and embrace what they like to do,’ Casteel says.”

“Remember those hilarious underwater dog photographs that went viral earlier this year? Seth Casteel, the photographer behind those shots, emailed us yesterday to say that he had been invited onto Good Morning America to talk about his work and how he creates it.”

If you then spoke to someone at Tandem Stills + Motion, which represents part of his portfolio, you may have heard: “He’s actually in a pool right now.”

Mr. Casteel was, in fact, underwater on Monday afternoon — in a swimming pool in Temecula, Calif., with a Boston terrier named Rocco. His phone, meanwhile, was ringing off the hook with callers wanting to know more about his photos of dogs. 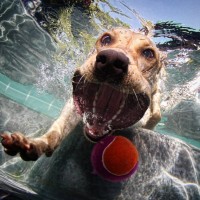 On Thursday night, the Los Angeles-based photographer received a couple of emails informing him that photos he had taken of dogs underwater had been posted to Reddit and Google+.

“I woke up to a bunch of money in my bank account,” the photographer told The Huffington Post in a telephone interview, saying that he had received so many orders for prints that his newly established online store was experiencing stability issues.” 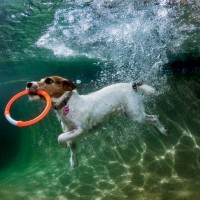