A Week of Their Own

HomeExhibits & EventsOnline Art GalleryGallery 9: Who Let the Dogs In? The Legacy of Captain William Lewis JudyEnter Gallery 9A Week of Their Own

In 1928, Captain Judy believed it was time for a unified show of appreciation for all of the ways that dogs had served man in times of war and peace throughout history. He put forward that the last week of each September be declared National Dog Week.

Educating the public about National Dog Week at the time of its initial observance was challenging. Imploring the nation to spend time and money on the care and maintenance of dogs during uncertain economic conditions proved daunting even for such a master of marketing as Will Judy. “National Dog Week Almost Got by Unnoticed,” bemoaned a headline in the Free Lance-Star of Fredericksburg, Virginia on September 20, 1934. The article began with the statement, “Here it is Thursday of National Dog Week and not a thing done about it.”

By the mid-1940s, however, National Dog Week was ready to make its Crate Escape into American popular culture, and became wildly popular. Each September, from coast to coast, Americans were treated to the greatest dog show on earth when all kinds of canines captured hearts, and a united chorus of canine lovers sang the praise of the loyal dogs of the nation.  Judy explained: “National Dog Week…has had the basic goal not so much of more dogs, but of better dog owners and better care for the dogs we already have.” 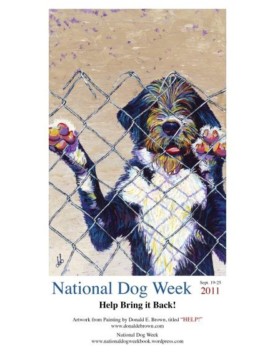 Each observance was presented with its own theme highlighting important topics such as the Dog’s Role in Safety (Fire Dogs) and in the Military and Police Work, the importance of finding good homes for “stray dogs,” the importance of dogs in the building of strong character in young people as well as celebrating the powerful friendship between dogs and their humans. Each year’s observance was enhanced by a meaningful logo and accompanied by a beautifully rendered poster stamp. 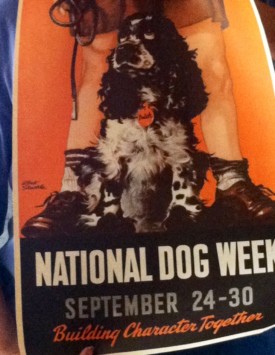 Fig. 17 – National Dog Week Poster Stamp designed by artist Albert Staehle. Images like these captured the themes of each NDW throughout the decades.

The end of World War II unleashed a new age of prosperity in America, and dogs became a staple of the American dream. Dog obedience training became a matter of importance; if dogs were to live peacefully among us, they’d better behave. As the scene in Figure 16 (left) suggests, this shift was reflected in the types of programs and observances of National Dog Week during these decades.

By the 1970s, Judy’s special week for the dogs might have been dubbed National Dog Weak as it faded on the American calendar. It would take a hero at the dawning of a new millennium to put the strength back in the week, energizing a grass roots movement to keep the motion in the Dog Week movement.  Luckily for all concerned, such a hero was on the horizon. 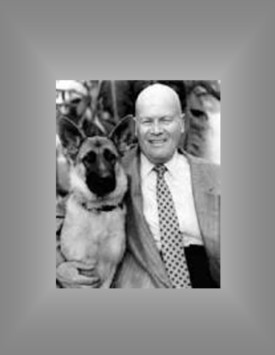 That hero was Captain Arthur J. Haggerty, who in 1960 established the nation’s first facility to recognize dog obedience training as a profession, and championed some of the more under-appreciated, but loyal, breeds. In time, Captain Haggerty, a great admirer of Will Judy, came to the rescue of our dogs, putting National Dog Week back on the American calendar. National Dog Week might have been a literal thing of the past if not for the efforts of the late Captain Arthur J. Haggerty.

In his lifetime, Captain Haggerty, a certified Level Three Dog Obedience Trainer, handled thousands of dogs for military and protective services, as well as for the entertainment industry. His appearance on Late Night with David Letterman inspired the popular segment Stupid Pet Tricks, while his charismatic and physical stature both inspired the icon for Mr. Clean and landed him numerous TV and film roles.

In 2005, a year short of his passing, Captain Haggerty made it his personal mission to make sure the nation understood the relevance of National Dog Week. In his website devoted to the observance, Haggerty reached out to a new generation of dog lovers, imploring them to embrace the spirit of Will Judy’s movement. This seven day salute to the canine was now in the hands of those who claimed to be dog’s best friend.

In January 2010, author Lisa Begin-Kruysman established the National Dog Week Blog to share her research on the history of National Dog Week and to honor those individuals who continue to exemplify the mission of Will Judy and his enduring legacy of dog welfare. 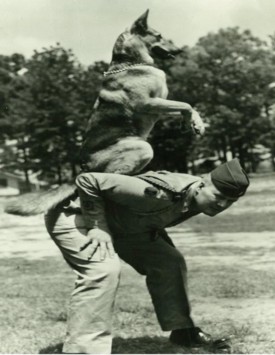 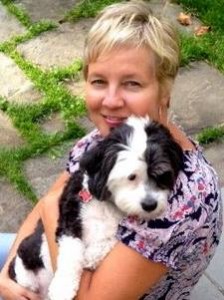 Lisa Begin-Kruysman is an author of fiction and non-fiction books often featuring her favorite writing topic, the human-canine bond. The stories of her well-received short-story collection Something’s Lost and Must be Found were inspired by posts published on her blog that was established in 2010 to educate dog lovers about, and to promote, Will Judy’s venerable National Dog Week movement and subsequent book, Dog’s Best Friend (McFarland – 2014). The author is a graduate of the University of Connecticut and previously worked as a Human Resources Associate at Home Box Office in New York City. These days she derives inspiration writing near “the ‘cric” in Ocean County, NJ where she resides with her husband, Rich and Foster-to-Forever dog, Teddy.

This online exhibit is excerpted from Lisa’s definitive book on this subject: