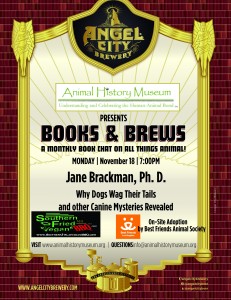 We are thrilled to announce the launch of our Fall book chat about all things animals, hosted by Angel City Brewery in downtown L.A.!  Our deepest thanks to Angel City for offering us their hip-but-comfortable space.  Come early to check out everything else happening before the talk, not to mention all of the awesome beers, food trucks and other events Angel City Brewery has on tap all the time!

There’s never a cover charge for the brewery or the speaker series.  A portion of the proceeds from all beer sales will be donated to Animal History Museum (thank you again, Angel City!), but please designate a driver and drink responsibly. 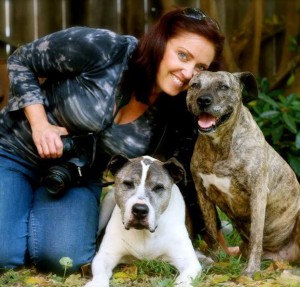 Lori Fusaro’s life changed in June 2012 when she met “Shady”,  a depressed, 16-year-old dog with an infected eye and cancer, languishing in the South L.A. Shelter.  According to Lori: “I thought Shady was a stray that found her way into the shelter.  Turns out I was wrong.  She was an owner surrender…. Living her entire life with family and then dumped because she was too old.” Lori made the decision to adopt Shady, rename her Sunny and get her medical treatment.  More than a year later, Sunny is not only going strong, but became the inspiration for the Silver Hearts project. “When I realized that there were probably hundreds of Sunnys languishing in shelters, I knew I had to something about it. Silver Hearts became a way that I could use my photography to show these dogs as loving, happy souls that have a zest for living and deserve to spend their golden years in a loving home.”

About the speaker: Lori Fusaro owns and runs her own photography studio near downtown Los Angeles.  Her Silver Hearts project has been featured nationally, including NBC Nightly News, The Today Show, ABC News and CNN Headline News, with print stories appearing as far away as Malaysia.  Lori also has been active in the L.A. rescue community for more than a decade.

Starting at 5pm: Want some dinner? Southern Fried Vegan BBQ will be out in the parking lot serving up some delicious down-home cookin’.  Want a buddy to share your meals with for the next 5, 10 or more years? NKLA will be holding an adoption event too. Find the next furry love of your life! 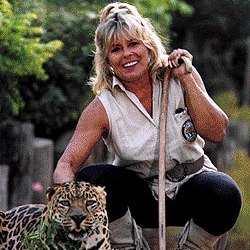 Take a walk on L.A.’s wild side… safely

“Opossums don’t know any better than to eat out of people’s garbage and hide in their backyards,” according to Wildlife Waystation founder Martine Colette. “What would you do to survive if your natural home was just destroyed one day? Some people feel threatened co-existing with animals. But all the animal is trying to do is stay alive.”

What can you do if you suddenly cross paths with an opossum, coyote, mountain lion or any of the other many species native to the LA area?  How can you help these animals thrive while protecting yourself and your home?  Find out!

About the speaker: A lifelong animal lover, Martine founded the Wildlife WayStation in 1976.  Today, she is the Director of the 160-acre facility that has provided aid and support to more than 75,000 wild and exotic animals from all over the world. The ranch also offers a 24-hour, 7 day-a-week wild animal response service and an education center. The Wildlife WayStation processes an average of 60,000 phone calls per year. Martine is also the designated wild animal expert for the city of Los Angeles, helping Angelenos navigate the tricky balance as the city’s growth encroaches upon more wildlife areas.

Starting at 5pm: Want some dinner? Mobile Homestyle Food Truck will be out in the parking lot serving up gourmet eats, including a half-down vegan options.  Want a buddy to share your meals with for the next 5, 10 or more years? Best Friends Los Angeles’ mobile adoption unit will be back for another adoption event too.  Find the next furry love of your life!

Why dogs wag their tails and other canine mysteries revealed

Curious about canines?  Wonder why your dog wags her tail?  Will we ever really understand what dogs think? Can dogs see TV?  How do they see color?  What’s behind the wet dog shake-off? Dr. Jane Brackman humorously deconstructs some of the assumptions, myths and mysteries surrounding our canine companions.

About the speaker:  Jane Brackman, Ph.D. is the author of two books about pets in 19th century America.  She consults with museums and her articles about canine genetics and domestication appear regularly in popular publications.   She blogs about dogs at Doctor Barkman Speaks.  Jane was a guide dog school administrator for several years and also served as the Executive Officer for the California State Board of Guide Dogs for the Blind, a consumer affairs board that licenses California guide dog schools. Her interest in the dog as a social science topic stems from her experiences in education, guide dog school management, canine biology and history.

New this month!  Think you know everything about canines? Put that knowledge to the test: we’re starting trivia for beer and other prizes.  Teams up to four people – so bringing your three smartest friends – or at least three friends who’ll share that celebratory drink with you.

Starting at 5pm: Want some dinner? Southern Fried Vegan BBQ will be back in the parking lot serving up some delicious down-home cookin’.  Want a buddy to share your meals with for the next 5, 10 or more years? NKLA will be holding an adoption event too. Find the next furry love of your life! 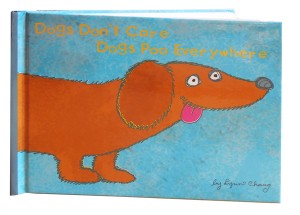 Gift ideas for the holidays!

Meet Lynn Chang and Roger Kabler… hear about their terrific new children’s books, Dogs Don’t Care, Dogs Poo Everywhere and Montague: The Pit Bull of Park Avenue… and then design some personalized animal-themed holiday gifts of your own for family and friends!

Bring your dog, and turn his or her paw print into an original doggie work of art, complete with an artistic flourish and signature from Lynn or Roger.  Can’t bring your dog?  Your cat too cool to be seen with you in public? Horse doesn’t fit in the Prius?

Bring a photo of your companion – or surprise someone with personalized artwork featuring their companion – and our illustrators can create an impromptu signed caricature.  Looking for something more?  Roger can also turn a photo of your companion into an acrylic on canvas painting to treasure for years to come.  You can also pick up or order autographed copies of their new books for the kids on your holiday shopping list.

All art sales – and as always, a portion of the evening’s beer sales – benefit the Animal History Museum.  And back this month: team trivia for beer and other prizes.  So have fun, enjoy a cold craft beer and create a truly special holiday gift to give – or keep as a family heirloom – all at the same time!

Want to learn more about the artwork we’ll be creating at this event?  Click here…

About Lynn: The Los Angeles author began her career with degrees from top-ranked schools University of Michigan and Stanford – in mechanical engineering.  Since graduating, she’s worked in marketing and product development throughout her career and explains “I love to write silly books with pictures because when I was little and couldn’t read those were my favorite types of books and I still like them.”  She recently wrapped a crowd-funding campaign in support of Dogs Don’t Care, Dogs Poo Everywhere.  Lynn also founded two websites, Kitty Planet and Chocolate Grail , launched a pottery line last spring and plans to design shoes, purses and fine jewelry next.

About Roger: The Los Angeles artist created original oil paintings – featuring more than 100 real dogs from contributors who supported their crowd-funding campaign earlier this Fall – for each of the 21 amazing illustrations featured in Montague: The Pit Bull of Park Avenue. He’s illustrating his second children’s book coming out soon, Bilbao Beatle Learns to Share by Andrea St. James.

Starting at 5pm: Want some dinner? Southern Fried Vegan BBQ will be back in the parking lot serving up some delicious down-home cookin’.